Home gallery How to Add Multiple Images to One Image

How to Add Multiple Images to One Image

This is a picture I did for a friend of mine just for the heck of it.  My husband took a picture of her daughter with his smartphone and shared it with me.  I wanted to take his black and white and turn it into something different for her daughter. 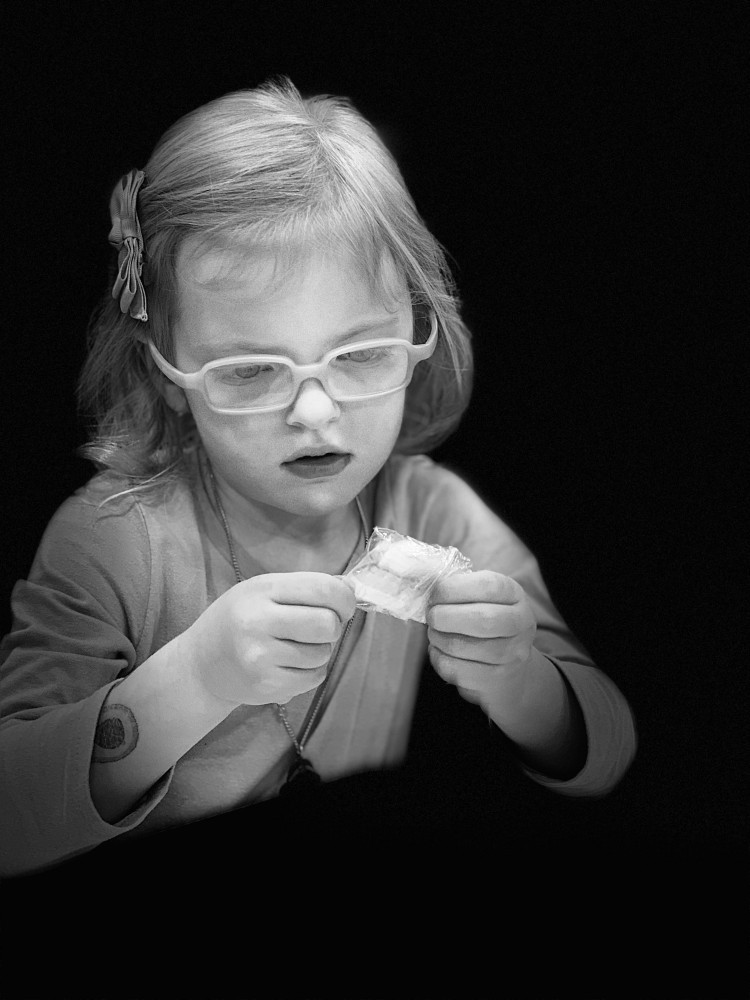 Here was the original picture.  I saw something in her face that I wanted to examine and focus on and did so with a few Photoshop touches.

I scanned the internet for some pictures of butterflies and flowers.  When I finally settled on some, I added those pictures to my image.  I took the move tool and adjusted their size and positiion.  If you hover over a corner of the outlined image you are moving around a curved arrow will appear, letting you also rotate the image. 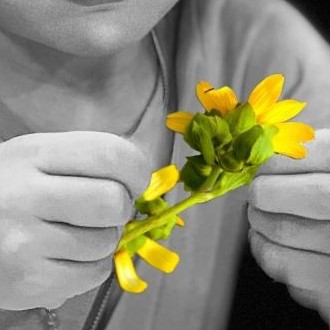 So, I had my flowers and my butterfly postitioned in the exact right spot.  Now it was time to start making it blend in.

I copied the butterfly layer.  Moved the copy to the side so I could use it as a reference.  With the original copy selected, I used the Background Eraser tool to erase the background to the butterfly image and the flower image.  I used the eraser tool to touch up the rest and leave no trace.  Again I repositioned, using the move tool. 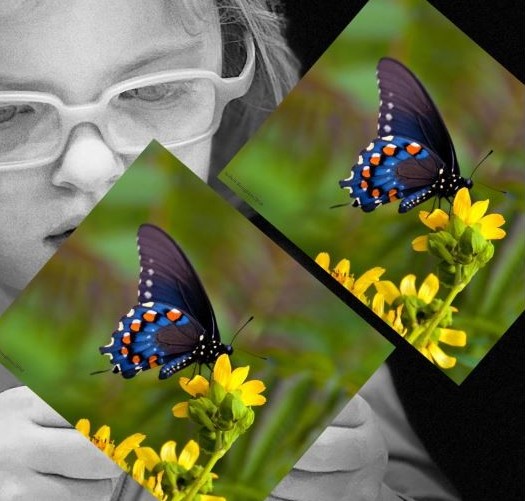 Once I had the butterfly and the flower in the positions I wanted, I turned them invisible and added another layer.  On this new layer, I selected the paint brush.  This is where I was going to paint over the little baggy in her hand.  I didn’t want to see a trace of the baggy left.  As the part of the image that it’s over is on the softer side, I decided to use a softer brush

Most of the time, I’m not particular about the brushes I use.  Once in a while I will make myself a new brush, but I will also mostly just use the built-in brushes that come with the program.  So, I used the Soft Round Pressure Opacity and Flow brush.  I took the Opacity down to around 50% and the Flow to 50% as well.

From there, I painted over the baggy in her hand, so that it appeared she didn’t have anything there at all.  Because I was going to replace the baggy with something else, I didn’t focus too highly on the detail in the shirt and where the baggy was not anymore.  I wanted the baggy to be hidden, but didn’t want to take up all of my time hiding it from view.  So, I didn’t put a whole lot of detail into it. 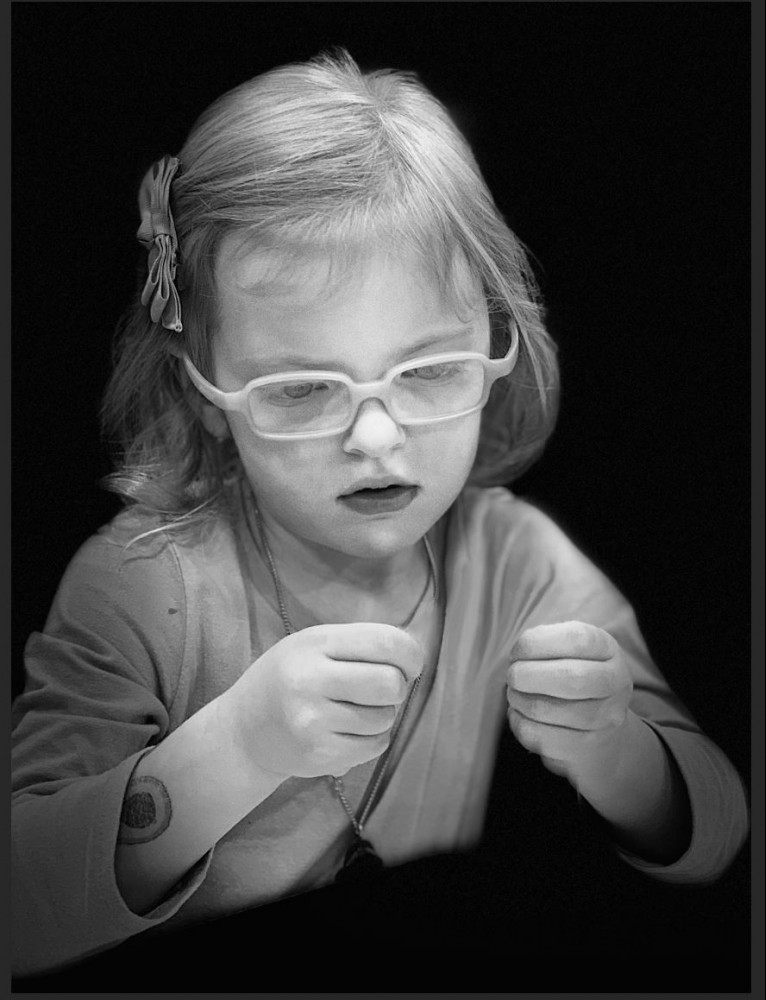 Holding down the alt key, you can sample from all the layers the different colors while you’re painting.  This gives you a quick use of painting the colors and blending them together.  A wheel will pop up when you hold the alt key down and the bottom color on the wheel will be your previously used color while the color at the top will be your newly selected color.

After getting the baggy out of the way, I turn on the visibility of the butterfly pictures and the flower image.  Adding new layers on top of this, I paint a little more to my liking. 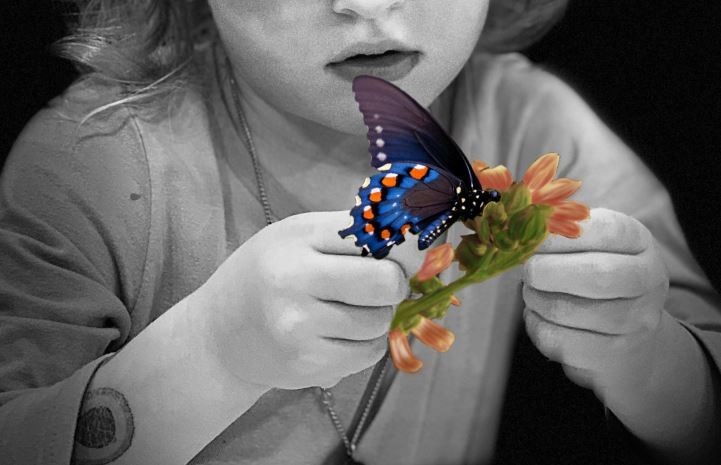 Time to add the shadows.  No matter how small a thing is, it’s going to have some kind of a shadow.  I added a layer on top of the girl photo but underneath everything else.  I wanted the shadows to be on top of the girl, but underneath the butterfly and flower.  Sampling darker colors from the girl image I was able to get a bit of a shadow on her hands and even on her shirt.

Now it was time to add a reflection to her glasses.  I had the butterfly in one group and copied them.  I merged all of the copied layers together and copied that.  I used the move tool again and moved one copy to one lens of her glasses.  I adjusted the opacity so it wasn’t too obvious.  Once I had it where I wanted and at the angle I wanted, I copied that and moved that copy to the other other lens, adjusting it with the move tool.

Because of the awe in her features, I wanted just a little bit more to my image.  So I added a little bit of a blue “dusting” around the butterfly with a soft paint brush on a new layer. 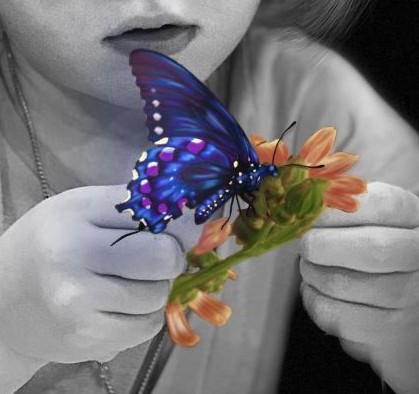 I wanted to do something with her hair as it looked a little chopped off in places.

So, taking a hair brush I created, I sampled some colors from her hair and, on a new layer, I started adding in the strands.  After I was happy with that, I took that same Soft Round Pressure Opacity and Flow brush to add in a few extra stray strands of hair. 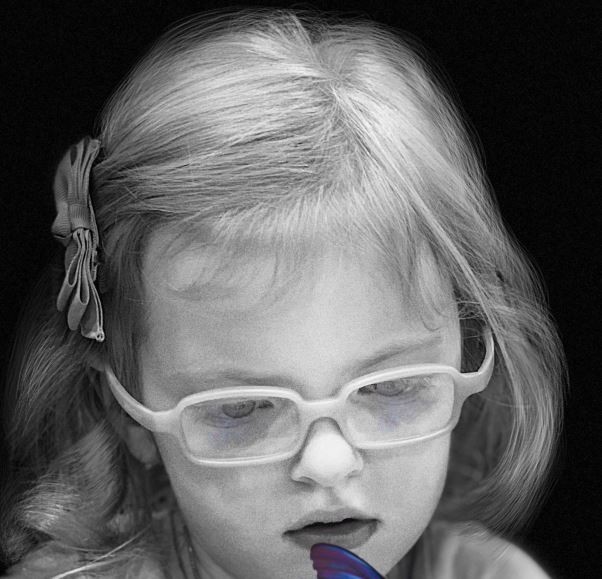 These are the strands I added to the image: 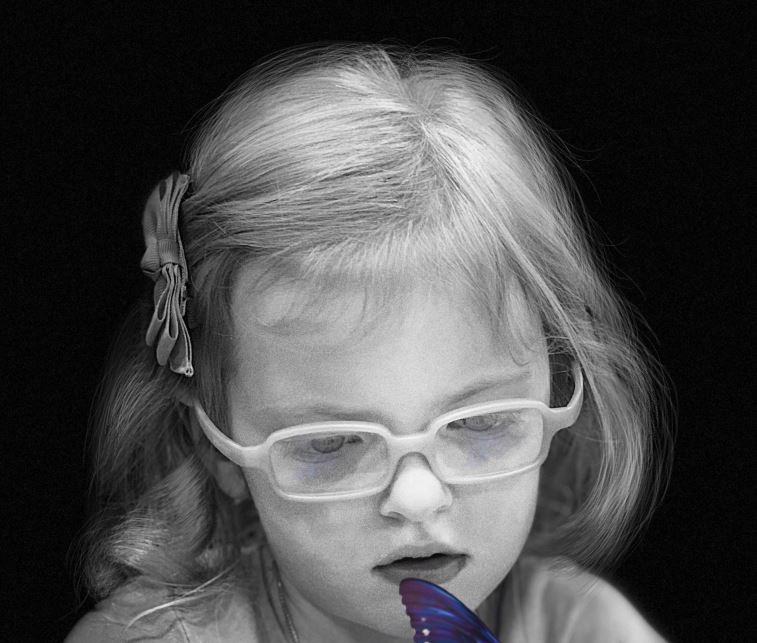 Here is a bit more detail to the extra single strands I added to the image: 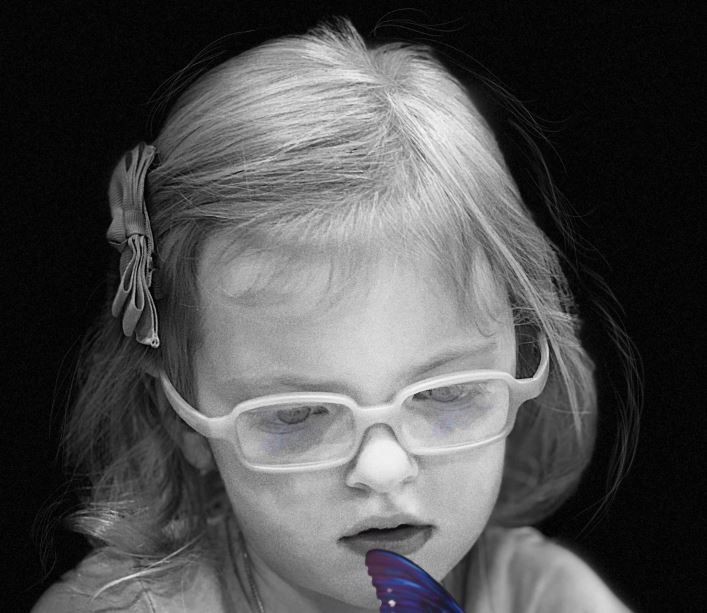 I checked for anything else that might draw attention away from the story of the picture and found a little spot on her shirt I wanted to erase.  So, I took the clone stamp and Alt + selected the sample I wanted the cover up to look like and painted over the little spot until the spot was gone. 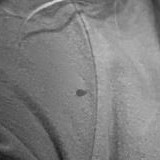 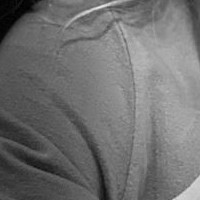 After I was satisfied with everything I saw, I selected

the crop tool and cut off some edging.

The end result is this: 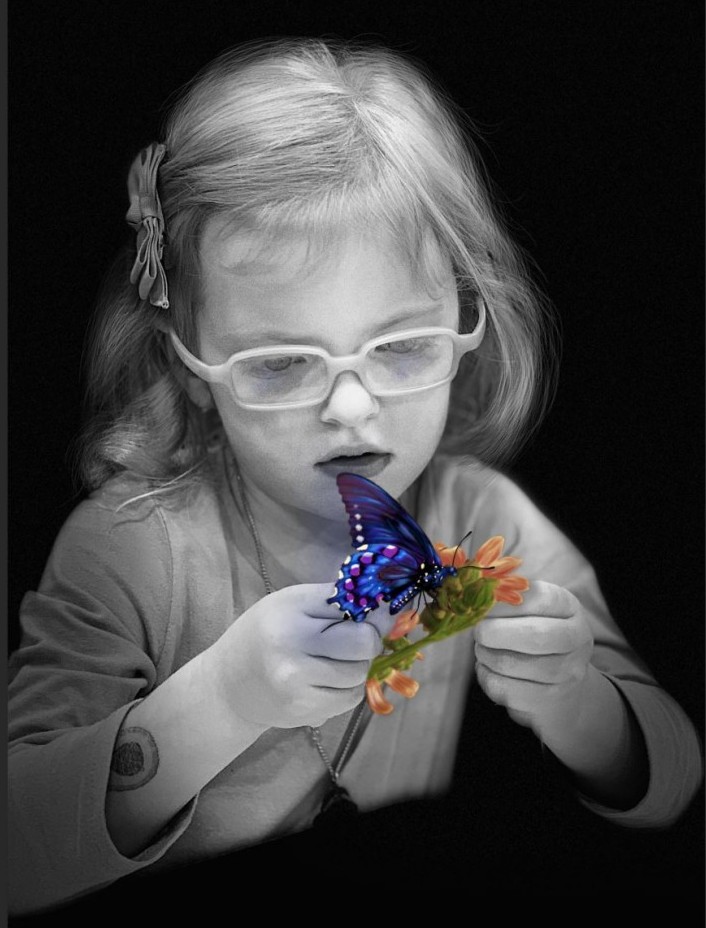 Hey!  Thank you so much for reading this post!  Let me know if you have any questions about this or if you’ve got any experiences using these techniques!